Looking forward to a creative and productive 2015!

This weekend I visited my sister in law in South Carolina and helped her paint her Ikea coffee table.  Visiting was even more fun with a project to work on together!  Unfortunately, I forgot to get a true “Before” picture, so here’s her table after we finished the first coat of paint: 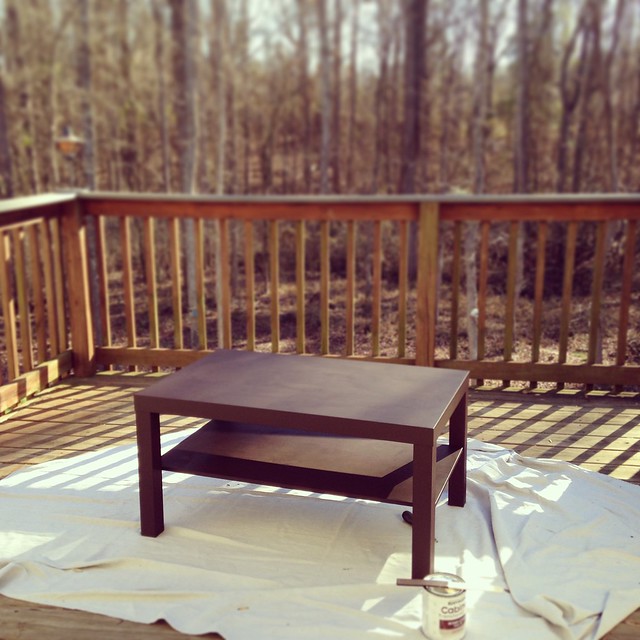 Since it’s a a laminate table, we used my leftover Rustoleum Cabinet Tranformations paint.  Most paints will peel off laminate after drying, but you can use a primer like Zinsser or a specialty countertop paint.  After two coats of paint, we used a design we created and resized/printed using Block Posters with white carbon paper to trace the design on the table. 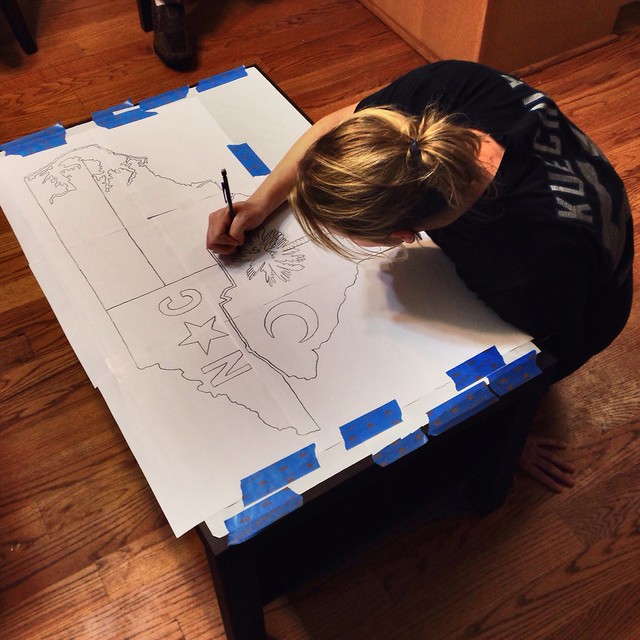 Then we painted along the lines with some leftover tester pot paint.  (You don’t need special laminate paint once you’ve painted the table, since regular paint will stick to the painted surface.)  You can see more of this painting method here. 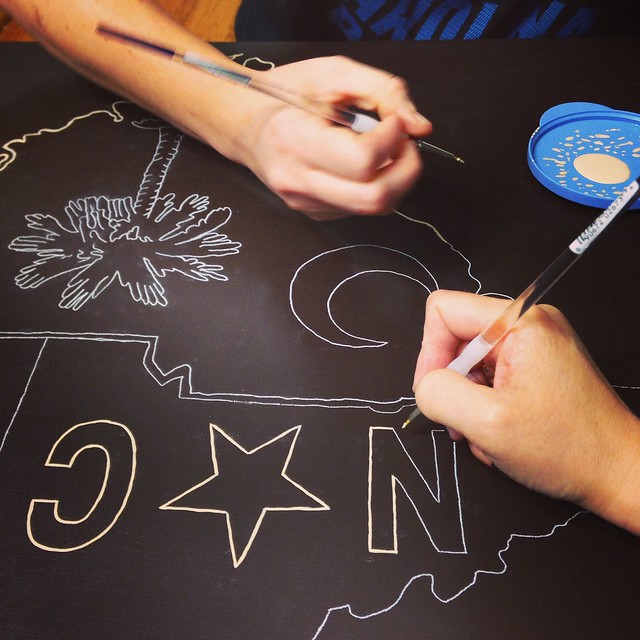 After letting the design dry, we painted on a dark glaze, then wiped away the excess.  This darkened the design and left an impression of wood grain, and also cleared away the little smudges left by the white carbon paper.  With the glaze applied, it almost looked like the design was carved into a wood table rather than painted onto laminate.  The final step was a sealer. 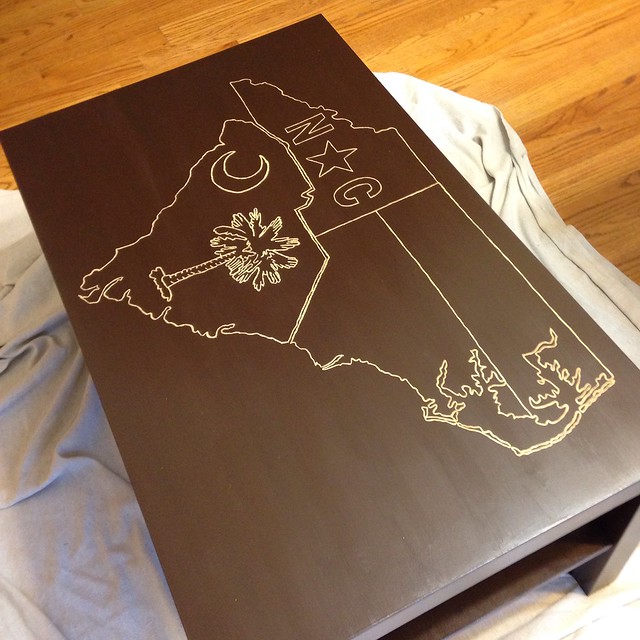 This picture was taken from the side to avoid glare, and then we were on our way home so I didn’t get more photos.  The coastline was so much fun to paint that I wish I needed a coffee table topped with Norway’s fjords.  I’ll save that idea for another day.

The sewing machine is set aside for a while as I spend a crazy amount of time painting our dining room.  I’m using the Herringbone Shuffle stencil by Royal Design Studio, but because of our heavily textured walls I’m having to trace the stencil, then fill in with paint by hand.  (The picture above shows about ten hours worth of work.)  It takes AGES, but because of my stencil painted headboard, I knew what I was getting into:

Thankfully our china cabinet is really large and really only fits on that one wall of the dining room, so I’ll only be painting on either side of it.

I think what really drew me to that stencil design is that it’s similar to this quilt that I’d love to make someday.  I’ve been semi-planning a gray-and-brights color scheme for the dining room.  Soon my table runner will finally fit in!

Well, semi-soon-ish.  Painting with little brushes on textured walls is a pain.

Recently my husband and I went on an interesting date to the Uncork and Create studio in downtown Charleston, WV.  My friend Rebecca Recco was our art instructor, which made the class that much more fun.  No artistic ability is needed to attend, thankfully!  We were led step-by-step through the entire process, and Rebecca shared lots of tips along the way.  You can see the example painting of “My Heart is in WV” to the far left, with Rebecca’s in progress work in the middle and Jay’s canvas to the right.  (The paintings on the wall behind are also Rebecca’s.)

Everything you need for the painting is supplied, and class members are encouraged to bring their own wine and snacks.  Our class was filled with couples, families and friends.  I think next time I might like to bring our daughters, too.

If you’d like to attend, check their calendar to see what paintings are being offered.  You can even arrange parties for fundraising, birthdays or work events.

We had a great time and plan to go back!

I started with a really ordinary white hallway and about a third of a gallon of leftover paint. Witness the boring hallway:

Not a lot going for it, huh?  Since our walls are 70s era textured, I didn’t bother with painters tape.  I’ve never been able to keep paint from bleeding under it and making more work rather than less.  If you have nice flat walls though, you might want to try Young House Love’s stripes tutorial.  If you live with textured walls, keep reading!  Painting stripes will take a bit longer, but you can do it.

I made lines six inches apart, starting at the baseboard at the bottom of the wall, using a level to make sure everything stayed straight.

Then I just marked with a pencil.

My paint color was Sharkey Gray by Martha Stewart, so I used a regular pencil and painted just over the lines.  (Use a colored pencil close to your paint color if you’re concerned about the lines showing up later.)  I left the lowest six inches of the wall white, then alternated gray and white up the wall, leaving the highest section white.  The last bit of the wall was higher than six inches, but I liked the look and left it that way rather than have a shorter gray stripe.  I think it adds a little height.

I used a smaller paint brush to follow my lines, then filled in with a slanted 2.5″ brush.  Here’s how it looks:

This is one of those projects that’s so much easier to appreciate in person, as I found the hallway kind of tough to photograph.  The lines draw you in and keep you going through the hallway.  Yes, kind of like a cattle chute, but in a much nicer way.

An under-appreciated, boring space in our house just became one of my favorite features — with nothing but leftover paint and a little time!  Score!