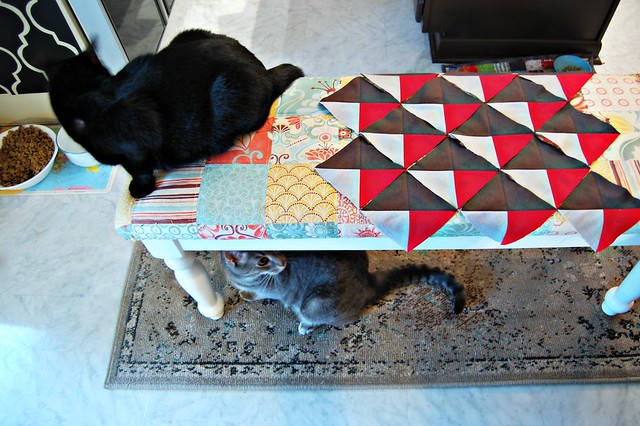 Our kitchen makeover is almost done.  One of the few remaining projects is recovering our patchwork bench so that it fits the updated room a little better.  The bench sits in our kitchen beside the door to the garage and functions as a mini mud room, with shoes thrown underneath and lunch bags and backpacks on top.  During the day when it’s cleared off, it’s a good napping space for cats.

I’m sewing blocks using colors pulled from the kitchen, black from the appliances, dark brown from the newly painted cabinets, gray from the new concrete counters and red from the accents.  I’m hoping for an “optical illusion” sort of finished pattern, but I’ll settle for less yellow/more modern.   The fabrics are peppered cottons that are especially soft.  I’m worried they may not hold up well against the cats.  But you know — one of the blessings cats bring to our lives is the gift of learning not to get too attached to “stuff”, right?

Recently, Young House Love blog showed their Ardex kitchen counters project, and I felt inspired to finally start on our kitchen’s mini-makeover.  I bought some supplies and dove right in.  I’ve hated our tile counter tops since we bought this house ten years ago.  It feels GOOD to cover them up. 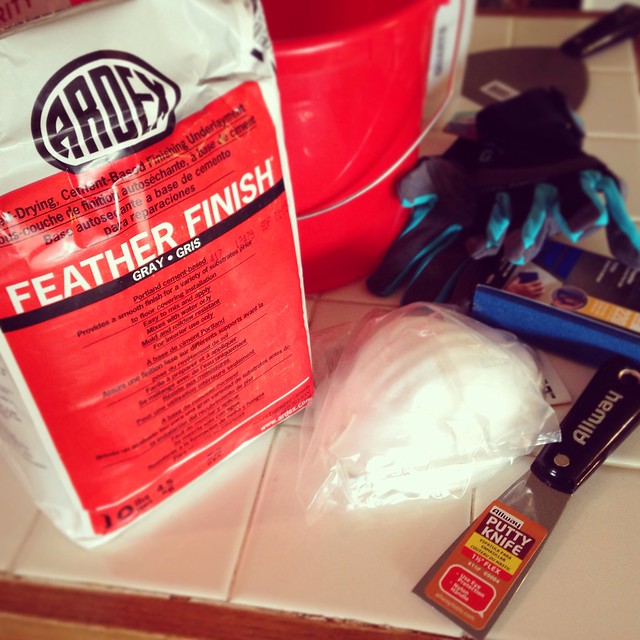 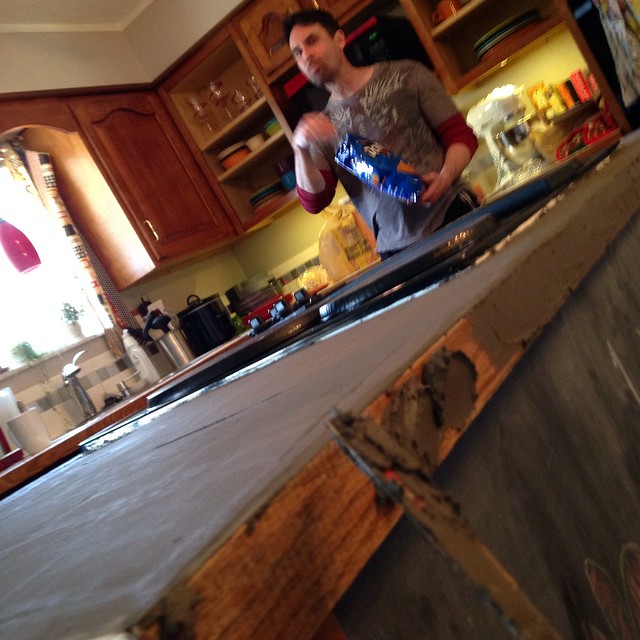 Since the thinner areas of concrete dried quickly, it was easy to see the tiles as the concrete was just beginning to set up.  The smudges are areas repaired after a stubborn cat decided he could walk on the counters even if I did say No. 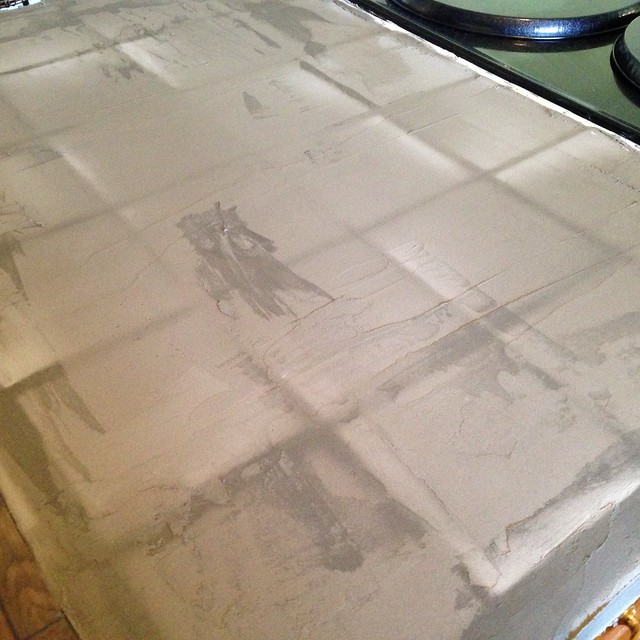 After the first layer dried overnight, the tile lines were still faintly visible. 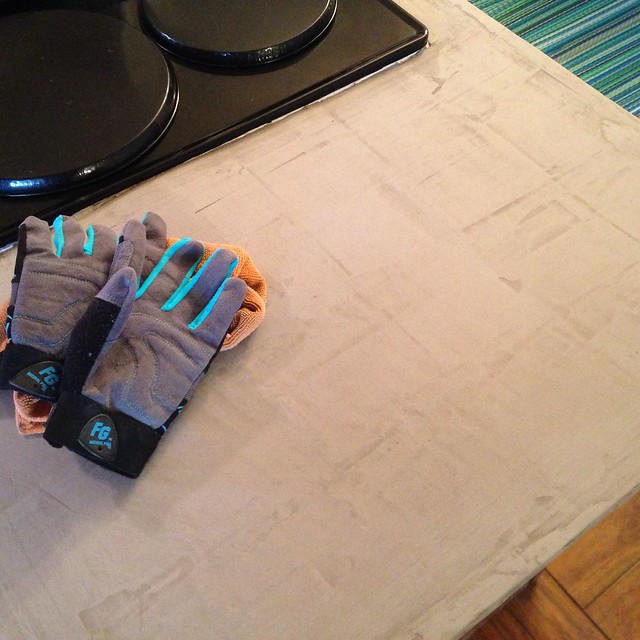 But with a second layer, no more tiles!  (Yay!)  I don’t have a picture of it yet, but I’m on the third layer and will decide after sanding and cleaning whether or not I’ll do a fourth layer.  I’m really hoping I’ll decide three is good, but I can be a harsh taskmaster. 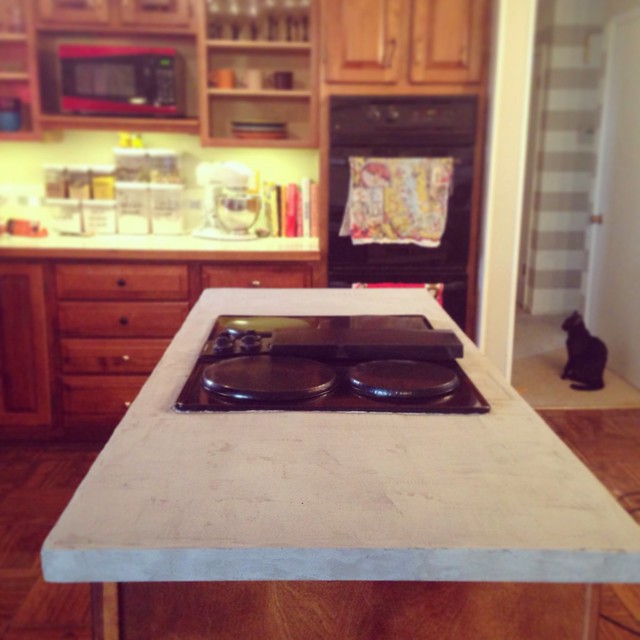 Meanwhile, I’ve done a much quicker redo on our fridge.  It’s never made sense to me that our refrigerator has a black front and almond sides. So I bought a roll of black Contact paper and traced the stencils I used on our headboard wall in our bedroom. 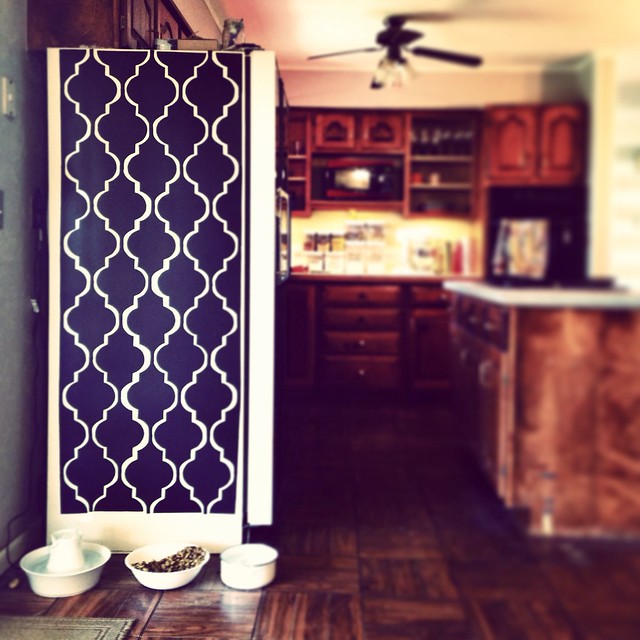 I’m not sure if I’ll be able to get started on it this weekend or not, but I have ordered a kit to paint the island.  I’ll need to order sealers for the concrete, too.  This project has slowed down my sewing, but I have managed to start on a new quilt-as-you-go cat quilt.  I need a nap.

After a LOT of quilting, the second of ten couch pillows has been completed!  This pillow pattern is also from the fabulous book Pillow POP!  I’m used to making half square triangles that use value to create design, but this one uses a difference in warm and cool colors.  I wasn’t really sure how it was going to work out, but I do love the result!

My pillow forms are a little larger than those used in the book and I also used smaller half square triangles, so the look is a little different.  I also quilted this one very, very heavily, as I expect it to be the one that sits behind my husband most often.  He’s not really gentle with handmade things, so it needs to be tough.  Extra quilting means extra strength!

And now my couch pillow project is on pause because my lovely niece has asked for my help in a very worth quilting project.  I think the fabric will arrive this afternoon, so the timing of this finish was perfect!

After I saw these framed hooks on Pinterest, I knew I’d do the same thing beside the door to our garage.  I used cheap, mismatched frames, spray painted them to match and attached them to the wall with foam double sided adhesive.  With a coat hook centered in the frame, our keys will always be easy to find, right by the door.  This took just a few minutes but I love the look and the function.

This one is pretty self explanatory.  I’m on a budget.  I just painted our family room gray.  I didn’t have any coordinating pillows, but I did have a bunch of stuffing, a gray sweater and a skirt that I don’t wear anymore.

Total cost: $0.  Someday I’ll decide on fabric for curtains and make a few more pillows, but this helps for now!

Hope you have a great weekend!